Wow, I feel like it has been ages since I have sat down and reflected on what I have been up to. And since I have last posted I’ve been playing absolute tourist, moving fast, in five countries. But I am getting ahead of myself…

After Indonesia, I made my way to Thailand where my first stop was Phuket. I didn’t love it. There were more Russians than Thais, the beaches were meh, you couldn’t get away from touristy restaurants and massage parlors begging you to come in, and the whole thing really had me missing Virginia Beach (and VA Beach is nothing to get excited about). Don’t get me wrong, I did get my fair share of massages and still relaxed on the beach, but where I stayed (Kamala then Kata) lacked charm and any sense of place.

A perfectly adequate beach in Phuket 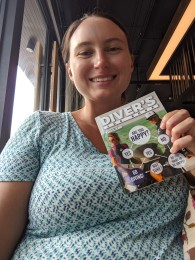 Have PADI cert, will travel 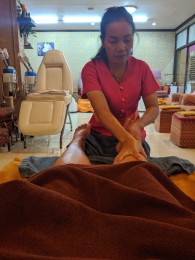 The first foot massage of many

One thing that was super fab was, after many years pending on the bucket list, I obtained my PADI Open Water certification for SCUBA diving. That was pretty awesome, and it sounds like I will have to return to Malaysia and Indonesia for some of the world’s best dive spots.

After a week of chilling at the beach, I made my way to Bangkok where I met up with my parents and we began a two-plus-week tour mainly through Thailand. I was super-thrilled to see them and we did get have some wonderful experiences in Thailand, including visiting the modern art spectacle that is the White Temple, getting family Thai massages, and watching lanterns floating into the river and the sky for Loy Kathong.

At the White Temple

At the White Temple 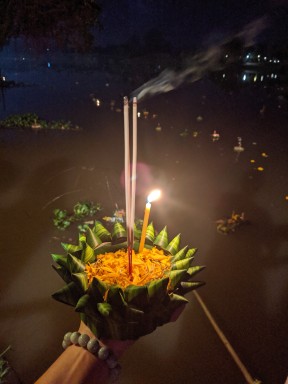 About to release my lantern 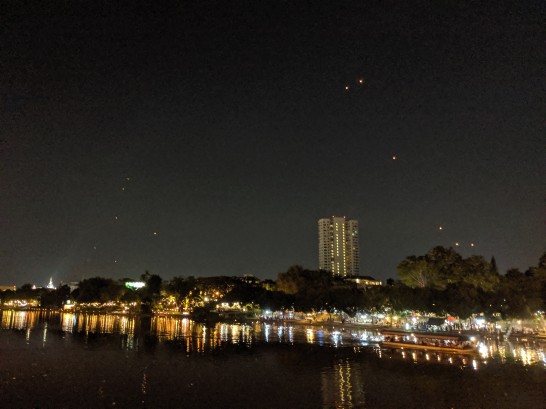 Welcome drink with Mom in Bangkok

I also took a cooking class with mom in Chiang Mai. I have always enjoyed Thai food, and now my appreciation of the food has expanded, and I *may* even have enough confidence to try out a few dishes when we get home. But overall Thailand was… as meh as the beaches in Phuket. There wasn’t a single city or town that I have a need to go back to, not even hipster mecca Chiang Mai. I feel overloaded on temples, or “wat” in Thai. And the pictures of the King everywhere and (legally mandated) positive vibes towards him is downright creepy to me.

Proud of my finished results

The most interesting part of Thailand to me was the language. In addition to all the “fun” jokes about ‘what wat?’ that one can make in Thailand, men also great people by saying sawadee krap. It sounds like “sweaty crap” in English (which, with the heat and humidity, is probably what you are feeling like). But the interesting thing is that men say this. Women would say sawadee ka. This is the first time I have come across a gender distinction in language based on the gender of the speaker rather than the thing/person being spoken about. And it extends to about every utterance. Not just “hello ka,” but “thank you ka,” “how much is it ka,” and so on.

While in Thailand we actually also took a day trip to Myanmar. The difference between Myanmar and Thailand is sharp. In Thailand, roads are perfect and paved, the countryside is litter-free, and everyone looks happy and healthy. In Myanmar tuk tuks rattle over rutted dirt roads, rolling by rivers clogged with trash, and some of the most grim looking street dogs I have ever seen. The temples were beautiful, though, and honestly if I had to live in Myanmar I would become a Buddhist nun and live in one. 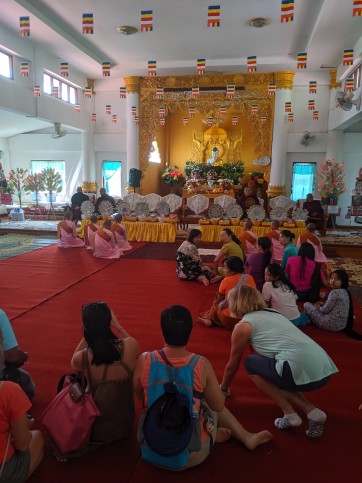 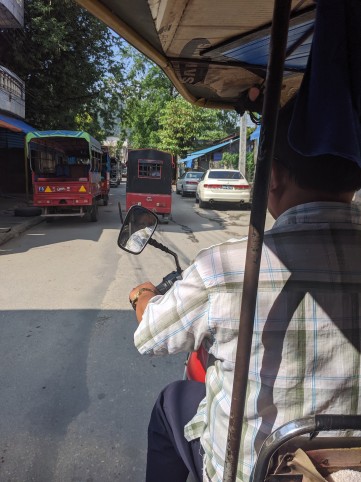 Tuk tuk on a good portion of the road

At the end of the day, I can’t say I was unhappy to leave Myanmar and come back to Thailand. “Meh” was looking pretty good. Here are some fave pics from the trip. 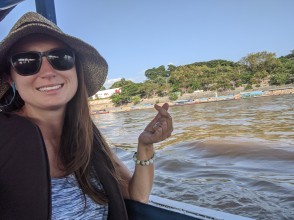 In a new country: Thailand

View all posts by rainesjl